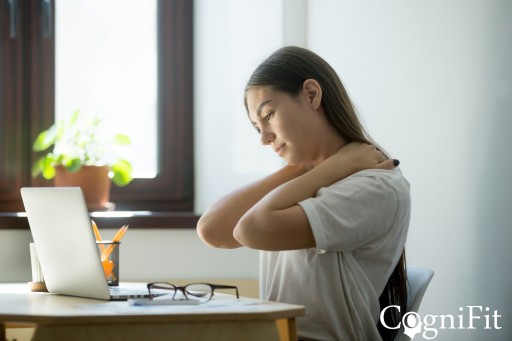 Affecting about 2% of the adult population, fibromyalgia impacts different areas of a person’s life. This disease is not limited to chronic pain or fatigue, but it also involves psychological and cognitive areas, commonly known as fibro fog. Fibromyalgia symptoms mainly include joint and muscle pain – diffuse pain affecting different parts of the body – psychological symptoms and mental state, for example anxiety and depression, as well as associated symptoms such as sleep disorders, skin diseases, etc.

CogniFit Cognitive Assessment Battery for Fibromyalgia (CAB-FB) is a professional tool, consisting of a battery of clinical tests and digital tasks, aimed at quickly and accurately detecting and assessing the presence of symptoms, traits, and dysfunctionalities in the cognitive skills affected by fibromyalgia.

The CAB-FB is intended for people over 18 years old, as well as seniors with fibromyalgia or associated risk of cognitive impairment. Despite the fact that fibromyalgia is more common among women, this test is also useful in men at risk of cognitive impairment due to fibromyalgia. Any private or professional user can easily use this neuropsychological battery. No special training or skills are needed to use this online professional program. All you need to do is register.

“Clinical history, interviews, clinical questionnaires and screening tests are the most effective tools for identifying cognitive impairments,” said CogniFit psychologist Alejandra Salazar. “However, in order to understand the depth of the cognitive impairment, it is necessary to carefully evaluate the various cognitive functions using clinical and neuropsychological tests. CogniFit cognitive fibromyalgia assessment is recommended as complementary to a professional diagnosis.”

The CAB-FB assesses the cognitive performance of people with chronic pain and fatigue. It helps to discover the main cognitive abilities (attention, processing speed, working memory, planning, etc.) that can be altered by this disease. At the end of the fibromyalgia test, CogniFit generates a fully detailed results report, which shows the risk index for this disease, warning signs and symptoms, cognitive profile, analysis of results, and recommendations. CogniFit online neuropsychological battery for fibromyalgia can help judge of patients’ quality of life and identify best support or intervention strategies.

This test is recommended for anyone who suspects or has fibromyalgia or fibro fog. For example, there is a high probability that people with post-traumatic stress disorder (PTSD), may suffer from fibromyalgia. Early detection of this disease will allow early treatment and prevent further cognitive impairment due to fibromyalgia.

The CAB-FB is a professional tool created by specialists in cognitive impairment. All CogniFit cognitive tests are patented and validated, accessible and easy to use. CogniFit is a leader in neuropsychological testing and cognitive stimulation, and is used and recognized by the scientific community, universities, foundations and medical centers around the world.

CogniFit is a global leader in developing online programs to assess and train core cognitive areas such as attention, memory, coordination, perception, and reasoning. As a digital health company, CogniFit specializes in scientifically validated cognitive tests and brain training programs, all available online at www.cognifit.com.

CogniFit’s patented technology has been designed by an international team of scientists, neurologists, and psychologists who investigate and combine the latest discoveries on the brain with advanced adaptive algorithms and big data analytics. For over 15 years, CogniFit has been developing personalized brain fitness programs with leading scientific institutions and published its results in several peer-reviewed publications.

Today a major vendor in the cognitive assessment and training market, CogniFit offers its programs to individuals and companies in various verticals, such as healthcare, education, research, health and wellness, driving and human resources. Its brain fitness solutions are available in 19 languages.