Research conducted on a patient suffering from Fibromyalgia and Rheumatoid Arthritis showed that cognitive impairment symptoms in Fibromyalgia were severe compared to that of rheumatoid arthritis. Patients who suffered from Fibromyalgia suffered from memory loss and were unable to concentrate on the basic task at hand. They also struggle with numbers and are unable to perform basic math. That part gives us the basic understanding of what Fibromyalgia Rheumatoid Arthritis causes. Next, we are going to compare these two diseases for a better understanding of what causes them, their symptoms as well as the cure.

Is Fibromyalgia a form of arthritis?

Fibromyalgia causes pain on joint and muscles, just like arthritis, but it doesn’t destroy joints, muscles or soft tissues the same way arthritis does, though it’s said to intensify pain. It’s an arthritis-related condition, with similar symptoms and effects but different causes.

What is the difference between Fibromyalgia and Rheumatoid Arthritis?

Fibromyalgia vs. rheumatoid arthritis- Fibromyalgia and Rheumatoid Arthritis are two different conditions but have similar symptoms. The main difference between them is that they have a different causative agent. Fibromyalgia is a condition or disorder accompanied by musculoskeletal pain.

The two conditions progress differently as arthritis develops very slowly and causes damages to the joints and muscles, while Fibromyalgia develops rapidly and causes constant pain that worsens the sleep, but it doesn’t destroy soft tissues, muscles or joints.

Which is worse fibromyalgia or rheumatoid arthritis?

Fibromyalgia is said to be worse than rheumatoid arthritis. Although it doesn’t destroy your body tissues, it said to have chronic pains that disturb your sleep, thus interfering with the sleep. It’s said to intensify pains. It causes pains in tender points such as both sides of your head back, neck and on top of the shoulder, and the pain can be felt even after applying a small amount of pressure.

Rheumatoid arthritis is an autoimmune disease whereby the body immune system that is responsible for protecting the body from foreign substances mistakenly attacks the joints. Once this happen, there occurs and inflammations that make the tissues in the joint to thicken, resulting to swelling in the joints. This swelling creates a chronic pain around the join because synovial; a fluid responsible for lubricating the joint is thickened.

In the initial stages, it is hard to see the swelling around the joints and the redness, however with time, these conditions are visible. Here are the common symptoms of rheumatoid arthritis:

These symptoms my come and go and as the intense of the disease increases, the following symptoms may be seen:

The research found that there was a state of clouding of conciseness in patients this was termed as fibro fog or brain fog. This state was worse in Fibromyalgia patients compared to that of rheumatoid arthritis patients.

Brain fog incorporates difficulties in using a language, memory loss as well as difficulties in learning. The symptoms usually tend to descend in fog manner around the patients and hence its name.
In both Fibromyalgia and rheumatoid arthritis, brain fog effect is common. This condition mostly ranges from mild to severe and it can vary from person to person and from day to day. Below are the symptoms of brain fogs: 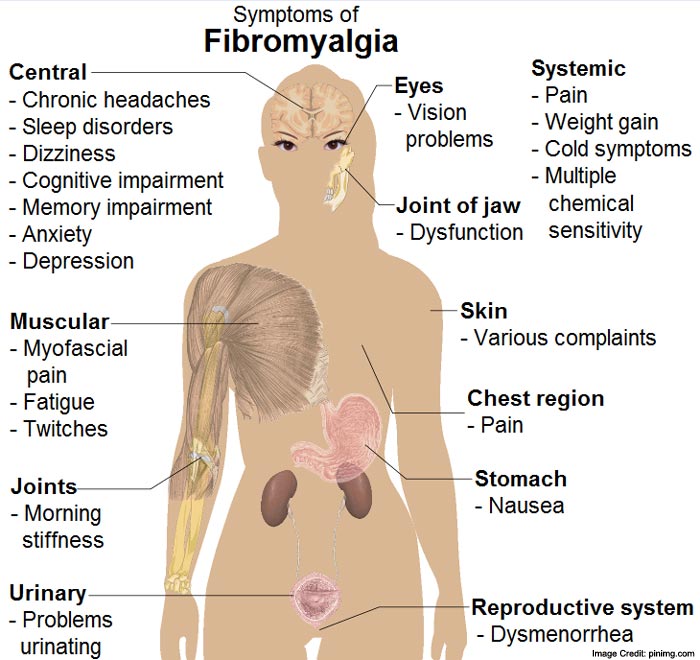 1. Directional Disorientation – patients with this condition tend to lose their ways in the surroundings. They don’t recognize familiar surroundings and hence have a hard time remembering where they keep their regular items in their day to day activities.

2. Poor Recall Ability And Word Use – patients have difficulties in recognizing words they already know and the names they often use. They tend to use incorrect words in sentences. Their short-term memory is greatly
affected and they, therefore, tend to be forgetful and they can recall what was previously heard or read.

3. They Cannot Multitask – the patient suffering from brain fog cannot focus on more than a single task. They do one thing at a time and when distracted, they tend to forget the initial task they were handling.

4. Lack Of Focus – they are often confused and they have trouble in processing information and concentrating.

5. Difficulty In Numbers – mostly common in Fibromyalgia patients. They find it very hard to perform basic math that involves additions, subtraction, multiplication as well as division. They fail to recall the numbers.

Fibromyalgia vs. rheumatoid arthritis – Apart from the above, patients have some variations as fibromyalgia patients have more challenges compared to those of Rheumatoid arthritis. They tend to have issues with their r ability to process a language. They cannot hold a steady conversation and cannot express their thoughts; this is because they find it difficult to get a word to use in a conversation.

There is no a single test for Rheumatoid Arthritis, a thus a doctor is supposed to conduct several tests to assists in confirming an RA treatment or diagnosis.

Your health provider will then recommend the best treatment procedure for you.

Some of the treatment measures are home remedies that will assist in prevention and treatment of this condition. These remedies include:

If still pain persists, then consider applying Onnit Joint Oil to pain targeted area. There is no test for Fibromyalgia, and thus it’s good to rely on your doctor solely for diagnosis.

This doesn’t have to make the patients slaves to this illness, with the information given; it is now easier to handle the condition now that you have information. You can also use a topical pain relief product such as Tiger Balm, which can temporarily ease your joint pain.